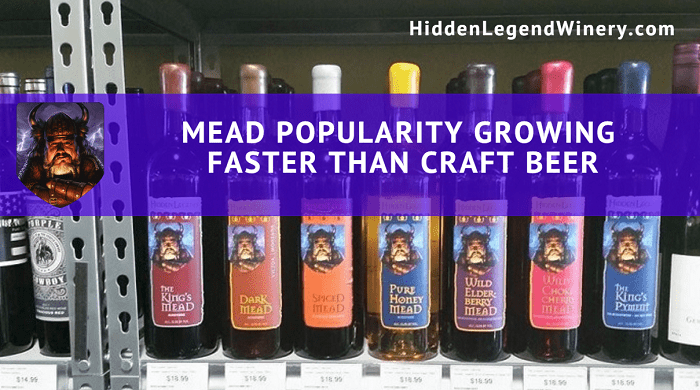 Why Is Mead Not More Popular?

A lot of people wonder why is mead not popular and it’s a good question. It’s delicious, been around for thousands of years, and yet most people just don’t drink it. That can be an issue as mead not being as popular as wine can give the impression it isn’t as good as other drinks, though if any of you have tasted it you know that isn’t true.

So, what gives? Is it priced too high? Is it just rare and difficult to make?

Let’s go over why you don’t see aisles of mead in your local grocery.

Back on the Scene

For the longest time mead was relegated to medieval reenactments and period films. It’s easy to see why no one thought it was a drink still available and it wasn’t till recently that homebrewing laws were struck down or relaxed. With the influx of people making their own brews came both the craft beer movement and the reintroduction of mead.

Mead hasn’t been served in the states beyond rare occasions here and there, usually surrounding a Viking or medieval theme. Even then, it just wasn’t made. There were less than 25 meaderies in the 90s but, thankfully that has grown to over 500.

It’s All About the Bees

Mead is known as the honey-wine and its base is, you guess it, honey. The bee population is dwindling due to the use of pesticides and other farming techniques. So, meaderies are having to produce their own honey and that can be very tough nowadays.

Also, knowing the reasons why bees are quickly in danger of becoming extinct, meaderies have to use other forms of beekeeping. Half of making mead is making interesting honey. You’ve seen all the different variations, from clove to orange blossom. If it’s getting harder to even have bees, it is going to be more difficult to play with the honey.

Hopefully, we can save our black and yellow buds. Though, as mead gets more popular perhaps that will be a big fight against their extinction. One of the reasons to consider when asking why is mean not popular versus wine is how they are both seen. Mead is so associated with the “unruly” pillaging of the Vikings and the lower classes of the medieval era while wine is associated with high-class society that what do you think people drink when wanting to be fancy? You guessed it, wine.

Mead hasn’t seeped into the culture as a high-brow drink and that is a shame since it is the drink of the gods. Royalty, religious leaders, even those who were worshipped drank mead. One of the prayers to a deity is literally a recipe for mead!

Changing this is up to every mead drinker. Going to a fancy party or bringing someone special over for a romantic dinner? Serve honey-wine. Help it get seen as the high-class drink it is. Then we’ll no longer have to ask why is mead not popular.

While mead is still mostly an underground drink, that is starting to change. Thanks to the relaxation of brewing laws, more and more meaderies are popping up. There are more mead tastings at beer and wine events, people are starting to ask for their local liquor stores to carry it, etc. That’s how it’ll change from why is mead not popular to when was it ever not?

It’ll just take time is all.

If you haven’t’ tried mead, you can always order it and have it delivered to your door. If you find you like it, ask your local store to carry it. That is how we’ll make sure mead is here to stay and that you can enjoy more and more varieties. One thing about something becoming popular is it increases the chances for different companies to try different things to remain competitive.

So, while we may not have the widest selection among the existing meaderies, you can see that changing lately. Brewers are getting more and more creative due to mead crossing into the mainstream. Do your part to make mead popular. Share it with friends, ask for it to be stocked, and tell people you enjoy it. Heck, if you like a particular bar to hang out at then ask them to have it as well. They aren’t likely to decline, it means you’ll come to them near exclusively.

Now that you know why mead isn’t as popular as it should be, you can help change that.

2 thoughts on “Why Is Mead Not More Popular?”

Why Wine Lovers Need to Give Mead Another Look

The History of Mead Wine