Want to learn about the process, parts, and stages of mead making?

They're fairly easy to learn, as there are 3 primary stages of mead making not unlike brewing beer or making wine. However, the stages are influenced by the mead-making process, which is different than making wine or beer in some subtle ways.

The 3 stages of mead making are primary fermentation, secondary fermentation and bottle conditioning-cum-aging, just like brewing beer or cider. However, there are a few distinct differences that you should know about.

Primary Mead Fermentation Is A Bit Different, But Not Too Much

Primary mead fermentation, the first of the three stages of mead making, is a lot like the primary fermentation stage involved in making any other kind of fermented - not distilled - alcoholic beverage. You make a rough mix of the fermentable material, which in the case of mead is honey rather than sugar that you add, water and any flavoring agents that you want.

If you want to add grape juice, fruit juice or spices, you can; if you don't, just mix mead and water. At this point, you add yeast (usually called "pitching") and put it into the primary fermentation vessel.

At this point, the yeast goes to work on the sugar, breaking down sugar (a form of hydrocarbon) into alcohol (a simpler hydrocarbon) and carbon dioxide. A primary fermentation vessel will contain an airlock that allows the mixture to offgas, bleeding the CO2 from the mixture.

What's different from beer or cider? Generally, it's the yeast; most meads use wine yeast rather than ale yeast or lager yeast, which is used to make beer and cider. The timeline is generally the same; about 2 to 4 weeks, however long it takes for the airlock to stop bubbling. Once that's done it's on to 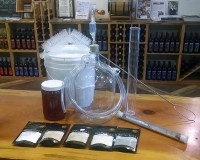 The mead maker will have to rack (siphon the mead into a clean container from the one that holds the liquid) and install an airlock for any gases produced by the remaining yeast (it will have mostly died by this point) to bleed off through the bubbler.

Just like making cider or beer, several rackings and re-rackings will likely be necessary, until the mead maker is satisfied with the liquid. At this point, it may be 90 or more days from the initial cooking of the must! However, when it comes to making mead, this is not the beginning of the end. It is merely - as Churchill said - the end of the beginning.

At this point, bottling happens! That means that bottle-conditioning and aging mead is what will happen in the third and final stage before the best part: consumption.

However, the mead-maker has more in common with the vintner or whiskey distiller than the beer brewer or cider maker - the process can take years before mead is ready to drink.

Many meads are single-batch, and some are blended; this depends entirely on whom is making it. However, once the mead is bottled, it will take some time before it has settled enough to drink.

Plan on waiting six months to a year, rather than the week or two required for beer or cider. This includes sparkling meads.

Bottling is fairly simple, however; you take sanitized bottles, fill them to the appropriate level and cork them. If creating sparkling mead, add a measure of sugar to it; the remaining yeast (trace amounts are present in every alcoholic beverage) will ferment this new addition of sugar and release carbon dioxide into the mead. However, a corked bottle doesn't allow off-gassing as this is a closed system, which traps the gas in the liquid.

This is - you might have guessed it! - why it's called carbonation.

How long will it take for me, you ask? Well, that depends. Partially on how well you've done the making but also on your subjective criteria. After a few months, open a bottle. Does it taste good, like it's matured into a quality product? Then your mead is at the right age and you can enjoy unreservedly; let libations abound.

Not quite there yet? Then give it a while longer. When it tastes good, that's how long that mead recipe needs to age before it's ready to drink.